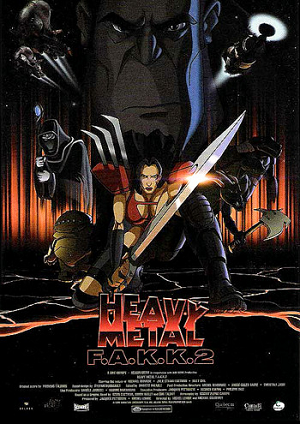 Heavy Metal 2000, also known as Heavy Metal: F.A.K.K.2 note Federation-Assigned Ketogenic Killzone to the second level outside of North America, is an animated sci-fi movie released in 2000. It is the sequel to the 1981 movie Heavy Metal, although there is no continuation of any plotlines aside from the reappearance of the Loc-Nar. Also unlike its predecessor it's not an Anthology Film, but follows one storyline throughout.

The space miner Tyler (Michael Ironside) discovers the Loc-Nar buried in an asteroid. The artifact corrupts his mind, turning him into a psychopathic madman who commandeers a ship to seek the fountain of youth. After Tyler and his mercenaries massacre a peaceful settlement and take several hostages, Action Girl Julie (Julie Strain) pursues Tyler across several worlds to free her captured sister and to stop him, finding several allies along the way.