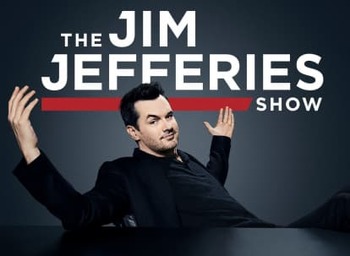 The Jim Jefferies Show is a satirical late-night talk show hosted by Jim Jefferies, where he discusses relvant news of the week with a comedic spin. Unlike many of his talk show neighbors, Jefferies doesn't focus on guest appearances, mainly relying on his own act to carry it. The show is also notable for interviews with various figures, and for early on in its run featuring skits with Brad Pitt as the weatherman.

The show began airing on Comedy Central on June 6, 2017. Initially planned as ten episodes, it was later extended to twenty. The show was renewed for a second season on January 15, 2018, and for a third season on January 30, 2019.