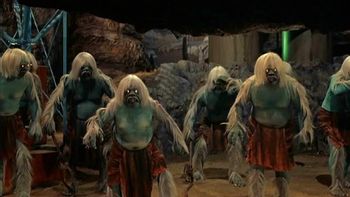 "Do you suppose that time stood still for you, troper? Much has changed since you passed from the world of men."
Advertisement:

Morlocks are a monster archetype like vampires and zombies. In contemporary versions, Morlocks (also called grimlocks, hadals, crawlers, hunters, CHUDs,note short for "Cannibalistic Humanoid Underground Dwellers" etc.) are usually descended from humans who became trapped underground by mischance or were driven into hiding there by their enemies. The low-light environments where these creatures live often lead them to develop Innate Night Vision (perhaps enabled by glowing and/or bulging eyes), or to lose their eyesight (sometimes along with their eyes!) in favour of Bizarre Alien Senses like echolocation. Another common Morlock trait is albinism (since less sun means less need for melanin), which tends to overlap with Albinos Are Freaks.

This concept evolved from the trope-naming Morlocks in The Time Machine, hideous troll-like beings that haunt the night while the innocent Eloi culture sleeps. This situation was created as a blunt commentary on class division and the dehumanizing nature of industrial society. Morlocks continue to be applied towards similar ends in modern science fiction and fantasy. Morlocks may represent everything that science and art cannot redeem in the working class, a somewhat insidious remnant of Victorian phrenology and its ideas of Evolutionary Levels that has left a huge impact in genre fiction. As literal embodiments of the dehumanized working class, they often prey on their former oppressors.

Some important elements associated with the storytelling aspect of this trope are the Morlocks' status as a branch of humanity or a local equivalent; their monstrous, usually cannibalistic, nature; and origins associated with the evils of industry and/or class conflict. Of course, the aesthetic may simply be used for Gollum-style creepiness. While living underground or in dark places is typical, it is neither defining (most Mole Men are not Morlocks) nor essential.

Morlocks are almost Always Chaotic Evil. They are often the byproduct of a Sufficiently Advanced Society.

Compare their cousins the Mole Men, as well as Future Primitive. If your Human Subspecies looks atavistic not because it's adapted to subterranean life but because it's retained ancestral primate features, see Frazetta Man.