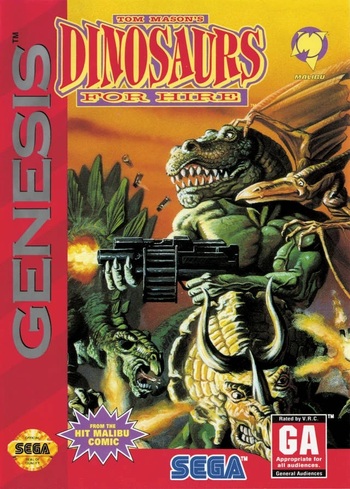 Admit it, Contra would be a much better game if the playable characters are andromorphic dinosaurs.
Advertisement:

Everything's Better with Dinosaurs - the Game.

Dinosaurs for Hire is a Run-and-Gun-platformer hybrid arcade game developed by Sega for the Sega Genesis, loosely based on the Tom Mason comic book series of the same name.

The titular dinosaurs, like in the comics, are a trio of dinosaur-like aliens from another planet, crashing on earth and working as mercenaries-for-hire. When giant monsters spawned from a bio-lab breaks loose, it's up to the trio to save the day.

Players can choose between the comic book's protagonists, Archie the Tyrannosaurus, Lorenzo the Triceratops and Reese the Stegosaurus, with Cyrano the Pterodactyl as their liaison for getting them various assignments.