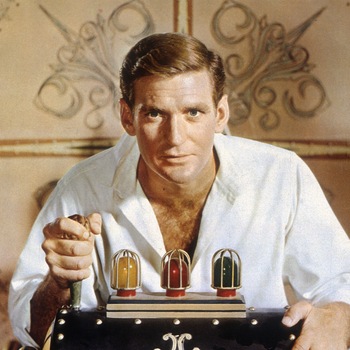 There are many changes from the novel, with Wells's socialist critique reimagined as an anti-war parable. After the Time-Traveler, who in this version is called "George" (Rod Taylor), demonstrates his invention, most of his colleagues criticize him for inventing something which they consider to have no practical value and wonder why a man of his genius isn't inventing weapons for Britain to use in The Second Boer War like a good patriotic citizen should be. Only David Filby (Alan Young) shares George's idealism, though he warns him to destroy the time machine before it destroys him.

George sets off for the future, stopping to see the effects of World War I, the Blitz of World War II, and finally the nuclear holocaust of World War III. George's arrival in the year 802701 plays out similarly to the original, though with the Eloi speaking English and Weena (Yvette Mimieux) being Promoted to Love Interest. The Back Story of the Eloi and the Morlocks is altered, with both being the descendants of people who survived in bunkers during World War III. When the war ended after three centuries, some people chose to remain underground, becoming the Morlocks, while others chose to take their chances on the surface, becoming the Eloi. The Morlocks are, of course, portrayed in the typical 1950s monster movie fashion.

The film concludes with a climax in which a group of Eloi, including Weena, are captured in the Morlocks' underground lair. George rescues them and teaches them to stand up for themselves. After briefly returning to his own time, George heads back to 802701, bringing three books with which to begin rebuilding civilization. The audience is left to wonder which three books he chose.

Tropes from the 1960 film version which weren't in the book:

Example of:
More than Three Dimensions