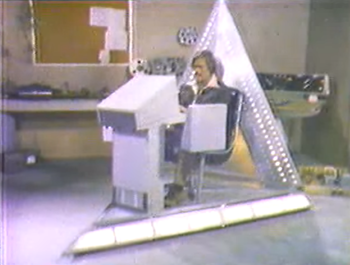 It's a Setting Update this time, so no Steampunk vibe for this Time Machine.
The Time Machine is a Made-for-TV Movie based on the H. G. Wells novel by the same name. It originally aired on NBC in 1978 as part of the Classics Illustrated series.
Advertisement:

This time, the story has been given a Setting Update. Rather than a Victorian gentleman, the Time Traveler is now an American scientist of the contemporary 1970s. His name is Dr. Neil Perry. The Government wants him to invent some wacky superweapons like a "laser death ray" and an "antimatter bomb." You know, for the Cold War. Instead, he builds a working Time Machine. Naturally, his superiors are aghast that he wasted their money building something that doesn't even kill commies. What is he, some kind of pinko idealist?

Anyway, Neil tests out his invention with trips to Puritan times and The Wild West. He then heads for the future, hoping to prove that the weapons the government wants him to build will ultimately doom humanity. Lo and behold, it turns out World War III leads to the world of the Eloi and Morlocks, just like in the 1960 version. And as in the later 2002 version, the Eloi's passive complacency is eliminated for the most part, rendering them more heroic. Also, Weena now has a brother named Ariel. No surprise, it ends with Neil and the Eloi teaming up to defeat the Morlocks.

Tropes from the 1978 film version which weren't in the book: