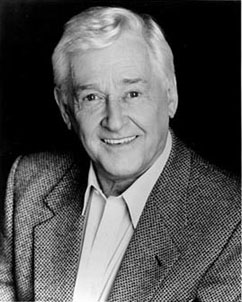 Angus "Alan" Young (19 November 1919 – 19 May 2016) was a British-born American actor, voice actor, comedian, radio host, television host and personality, who was best known for his role as Wilbur Post in the television series Mister Ed and as the voice of Scrooge McDuck in Disney films, TV series, and video games. Young also starred in his own shows on radio and television during the 1940s and 1950s.
Advertisement:

As a boy, Alan Young suffered from severe asthma, keeping him bedridden for long periods of time, which encouraged his love of radio, becoming a radio performer by age thirteen and then began writing and performing in his own radio show for the Canadian Broadcasting Corporation by age seventeen. The show was broadcasted in the United States, initiating Young’s career as an “All-American Boy” despite his British origins, becoming popular on American radio from 1944 to 1949 with his Alan Young Radio Show.

When radio begun to lose its popularity and his show was canceled, Young decided to put together a comedy act and tour the United States theatre circuit. After this experience, he wrote a television pilot for CBS in 1950, resulting in the well-received live revue The Alan Young Show that ran for three years. However, the strain of writing and performing a weekly show got to Young and the quality of the show declined, leading to his departure from the show and its cancellation.

Based on his popularity on radio and television, Alan Young had established a film career and made his film debut in Margie. Later in his career, Young founded a broadcast division for the Christian Science Church and provided voices for animated cartoons.