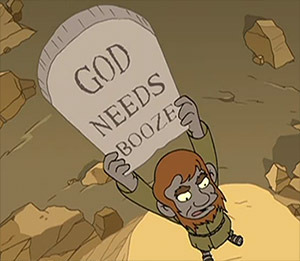 "Make it a double!"
In Real Life, religions tend to be built up of a vast number of different things and can take such a variety of forms that it can be very hard to pin down exactly what the word 'religion' means. As such, when someone needs one for a story, it can be very easy for them to to throw together any old thing and call it a religion. The reasoning is that as long as it looks the part people will fill in the details for themselves. This generally leads to a lot of works featuring religions that look an awful lot like Christianity, Buddhism, or similar, with what those people believe roughly copied, though, in some cases, the writer will chose to create their own from scratch to suit their needs. Either route can result in vast and detailed histories and belief systems that are complex enough (or at least seem to be), to draw us in and immerse us in the writer's vision.
Advertisement:

And then there are these ones.

A Single Precept Religion is one where the writer created the look of a religion, but none of the substance. They may be grand and religiony-looking, but if you actually stopped one of the adherents and asked them what they actually believe....they can't really tell you. Or, if they can, the entire totality of their beliefs can be written on the back of a matchbook. Of course, they could be members of a Mystery Cult, in which case initiates actually won't know what they have gotten themselves into and the inner circle won't be keen on telling you (but that is another trope entirely).

In this instance they don't know because their religion doesn't actually have any beliefs, or, if it does, there are very few of them and they may actually sound like a secular secret society or be more akin to mysticism.

Subtrope of Artistic License – Religion. Related to Fridge Logic. Compare Planet of Hats where an alien species or society is written this simply.