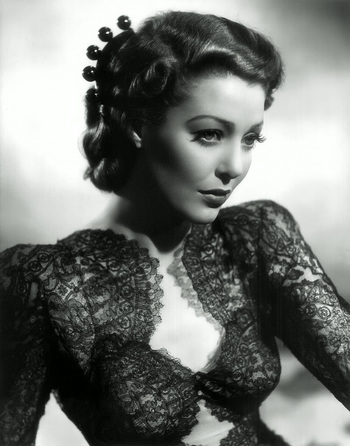 She was born in Salt Lake City, Utah. When she was three her family moved to Hollywood and soon after she started out as a child actress. (So did two of her sisters; all three acted well into their adulthood, although Loretta was the most successful.). She was an extra in the Rudolph Valentino film The Sheik. By the tail end of the silent era, she had graduated to starring roles, appearing opposite Lon Chaney in Laugh, Clown, Laugh (1928) and Scarlet Seas with Richard Barthelmess in 1929.

Her career continued to take off as the talkies came in. She was dramatically younger than she looked, which was why she played roles like the female lead in the romantic comedy Loose Ankles when she was only 16 years old. She was a Ms. Fanservice throughout The Pre-Code Era, appearing in hits like The White Parade and The House of Rothschild. 1939's The Story of Alexander Graham Bell featured all four Young sisters (Fourth sister Georgiana Young was a model who had only three acting credits, probably best known for being the wife of Ricardo Montalbán).

She was the female lead in Orson Welles' most financially successful film, The Stranger. She won an Oscar for Best Actress for her role in The Farmer's Daughter. After hitting 40 she quit the movies and transitioned to television, starring in the anthology series The Loretta Young Show for eight years. She retired from show business after her show went off the air in 1961, except for a brief comeback in two TV movies in the 1980s.

. Clark Gable impregnated her while the two of them were appearing in The Call of the Wild in 1935 note Loretta's daughter-in-law Linda Lewis said that she told her it was a "date rape", shortly before Loretta's passing. Her daughter Judy Lewis was kept in orphanages for a year and a half before Young "adopted" her. The secret was kept for decades.