Film / Androcles and the Lion 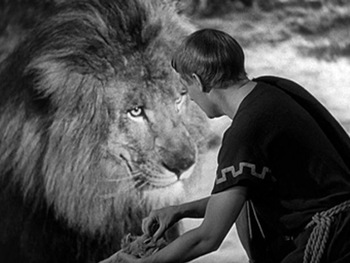 A 1952 black-and-white RKO film based on George Bernard Shaw's 1912 play of the same name, produced by Gabriel Pascal and directed by Chester Erskine.

The film follows Androcles, a Christian tailor gone fugitive from his Roman persecutors. While hiding in the forest he happens upon a wild lion who, instead of attacking the weak and starving slave, approaches him with a wounded paw, which it holds out to Androcles as if to beg his assistance. Androcles sees that the source of the lion's agony is a large thorn embedded in the paw; the slave courageously pulls it out. The lion is greatly relieved, but Androcles is soon arrested and joins a procession of Christian prisoners on their way to the Colosseum in Rome. Eventually he is placed in the arena and the lion is released upon him. Is it too much to hope that said lion may have a paw that has healed recently and might remember who helped heal it?

The page is under construction, in fact wouldn't mind getting a little help