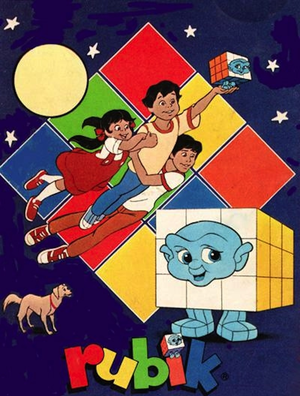 Rubik the Amazing Cube was a 1983 Ruby-Spears animated series based on... well... the then extremely popular Rubik's Cube puzzle toy. In this short-lived series, a trio of Latino siblings (Carlos, Lisa, and Reynaldo Rodriguez) are casually walking around a forest at night, and happen to witness a strange gypsy/magician-type character going at top speed in a horse-drawn cart. A strange object falls out of the cart, which looks like a Rubik's Cube. One of the kids picks it up and solves it, and lo and behold, the thing comes to life, complete with a face and legs. He calls himself Rubik, and immediately bonds with the kids, who soon have wacky misadventures with the eponymous cube.