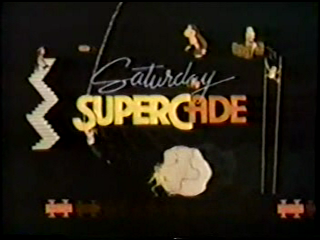 "Saturday Supercade! Gather 'round, we'll get your video friends together."
Advertisement:

An hourlong Animated Anthology of shorts, produced by Ruby-Spears for CBS, based on games from the The Golden Age of Video Games. As might be expected with the limited amount of plot in the games of that era, the stories diverged wildly from the games out of sheer necessity. The following games were featured:

This series was unusual in that it collected characters from different video game companies. The character most obviously lacking, of course, was Pac-Man, who had premiered the previous year in his own competing show on ABC.

Each game appeared to exist in its own universe, with the exception of the Donkey Kong and Donkey Kong Junior stories, which shared one (though they didn't overlap).

Each episode consisted of four segments. The first season had five games, with one segment each of Frogger, Donkey Kong, and Donkey Kong Jr (in that order), and alternating episodes of Q*bert and Pitfall between the DK and DK Jr segments. The second season's lineup was Kangaroo, Donkey Kong, Q*bert, and Space Ace, with Frogger, DK Jr, and Pitfall being removed. No single episode of the show featured all seven games.