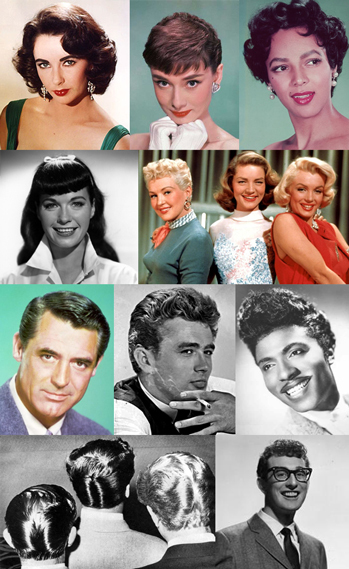 Every decade of The 20th Century has their own fashion staple depending on the zeitgeist of the era; The '60s was all about height, The '70s had the au naturel, The '80s emphasized volume, and The '90s favoured casualness. One such decade, with all of its focus on economic prosperity, domestic conformity, and scientific progress, emphasizes it in two keywords: prim and proper.

There has been little to no definitive template for '50s style hair, as the definitive hairstyles slowly developed to their own during the progression of the decade. Following the austere World War II years, hairstyles became more experimental and curl-heavy through the use of curlers, complex techniques, and hair-care products like pomade and setting sprays. By the end of The '40s and the early Fifties, women discarded the long hairdos characterized by victory rolls and pompadours in favour of wavy bobs and pulled-back chignons, and men side-parted their hair or adopted a civilian version of the crew cut.

As the decade progressed, women over the age of 20 sported slicker short hair, while teenagers sported either juniorized versions of popular hairstyles, longer curls, or ponytails; fashionable men used gels and pomades more liberally, with pompadours beginning to become more prominent. By the end of the decade, women gradually favoured bouffants and artichoke-style updos, a preview for the Beehive Hairdo and other hairstyles that would be the definitive styles of The '60s.