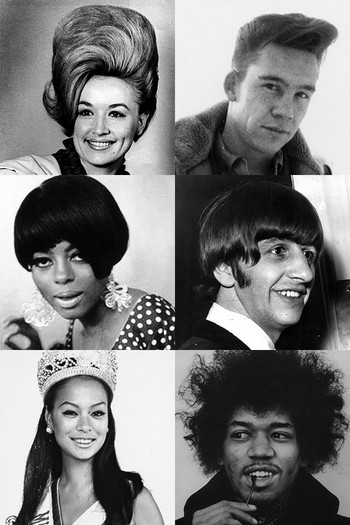 Considering the zeitgeist of the decade happens to be The Space Race, and much of science fiction is fixated on that, for hair, the sky is literally the limit, so much so that even the extreme hairstyles of 20 years later look quaint in comparison. There's even a quote that originated from The Deep South, that says "The higher the hair, the closer to God," that fully embraces this trope.

While there is no definitive hairstyle during the decade, as hairstyles rapidly changed throughout the whole decade, the constant staples include "getting high" and "letting loose". Hairstyles of the early parts of the decade had carryovers from the previous decade, with added height and volume, and a more streamlined look; the middle of the decade had Mod-influenced coifs with carefully-trimmed bangs, with some styles opting for geometric trims; and the end of the decade let all hairstyles loose for both sexes, with men sporting facial hair, and African-Americans started to sport their natural hair in reaction against previous hairdressing methods.

Note: Kindly provide examples of works after the 1960s, or period pieces and sci-fi settings made in the 1960s and beyond that have this type of hair. Instances of "[1960s work set in the 1960s] has 60s hair", except for very special cases, would state the obvious.