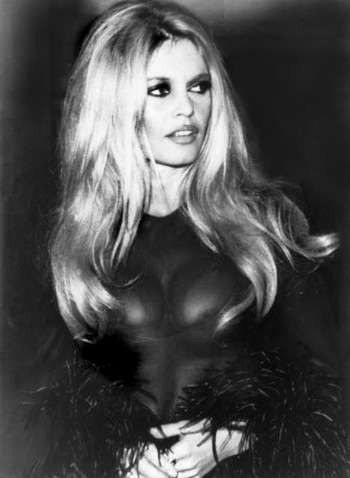 "I knew I had to be the best at something, otherwise I would be nothing. I knew I wanted the world to know about Brigitte Bardot."
Advertisement:

Bardot was very popular in her time, and still is an icon comparable to Marilyn Monroe in France. She was one of the few European actresses to receive attention in America, although her poor English skills limited her contact with Hollywood (not that she was particularly interested in working there). Bardot is also one of the few people whose initials were once enough to identify them; if you said B.B. in the '50s and '60s, everyone knew you were referring to her.

She retired from acting in 1973 and chose to use her fame to promote animal rights since, and sometimes dabbles in writing politically-flavoured non-fiction.

Her younger sister Marie-Jeanne "Mijanou" Bardot also became an actress for a time, and also retired from her acting career in The '70s.