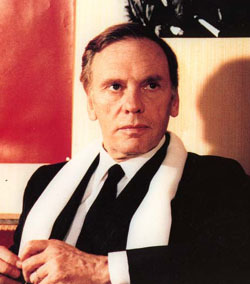 He was one of the staples of European cinema in The '60s sixties, both mainstream and arthouse. He came back to the limelight with his role in Krzysztof Kieślowski's Red, and has gained much acclaim for his roles in 2010s films by Michael Haneke.

He was briefly married to Stéphane Audran in 1954-1956. He married director and scriptwriter Nadine Marquand (who took his name and kept it even after their divorce) in 1961 and has had three children with her, actress Marie (1962 - 2003), Pauline (died when she was 9 months old) and producer/filmmaker Vincent (1973, last surviving).

In September 2017, he declared having a cancer, but has refused treatments.

Films with pages on TV Tropes