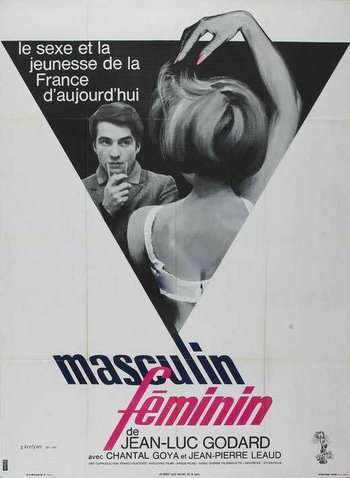 This film could be called The Children of Karl Marx and Coca-Cola.-Title Card
Advertisement:

Masculin féminin: 15 faits précis is a 1966 film by Jean-Luc Godard.

It is his rather free-form rumination on the contemporary youth of 1966, featuring numerous monologues where characters express their thoughts on what it is to be young. Jean-Pierre Léaud stars as a young man of 21 who has just completed his 18 months of compulsory service in the French army. He is spending time with Madeline (Chantal Goya), a fashion model who is branching out into pop music and has a single on the verge of release. Eventually they start a relationship, one which eventually includes Madeline's roommates Catherine-Isabelle (Catherine-Isabelle Duport) and Elisabeth (Marlène Jobert). All of the above is really just a framework on which to hang Godard's thoughts on youth and desire.