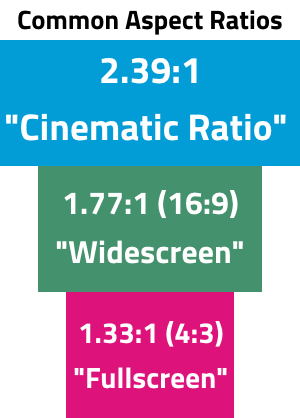 Aspect Ratio describes the visual shape of an entertainment medium such as television or film in terms of the image's width compared to its height.
Advertisement:

At the start most films and analog television formats around the world had a ratio of 4:3note Some standards used 5:4 (1.25:1) aspect ratio. This included Britain's 405 line TV and some computer monitors with 1280x1024 resolution (1.33:1, very close to cinema's "Academy Ratio" of 1.375:1), meaning that the image you see is four units wide and three units tall. Widescreen televisions use 16:9 (1.78:1), but this format didn't really catch on in the USA until High Definition television broadcasts caught on. Interestingly, most (but not all) High Definition cameras used for film shoot at a 16:9 ratio.

The most common aspect ratios for feature films today are 1.85:1 (sometimes mistakenly called "16:9") or 2.39:1 (also known as CinemaScope or "Scope"). Most silent films used the 4:3 aspect ratio, whereas "talkies" used "Academy" ratio of 1.375:1. The latter is the one the Academy Awards set as the standard ratio back in 1932.note There were scattered examples of pre-1950s films shot in widescreen. One is the 1927 film Napoléon, whose climax used three projectors side by side, much like Cinerama would use 25 years later. Its aspect ratio was 4:1, which still remains the widest aspect ratio in movie history. Another was The Big Trail with John Wayne from way back in 1930. It was a Box Office Bomb and helped kill the widescreen format for 20 years. It was the uprising of television in The '50s that led to the film industry seeking out methods of innovation to stay competitive. A lot of attempts at innovation were gimmicky and didn't last long—the first round of 3D, for instance—but two, the increased use of Color film and wider aspect ratios, proved enduring. Various ratios were tried; the widest ratio of all was Cinerama, which used three projectors to display a 2.89:1 image.note Problems with the synchronization of the three projectors doomed Cinerama as a serious production format, but in terms of sheer spectacle, it was a precursor to IMAX.

Another aspect ratio that's becoming more common is 18:9, or 2:1, also known as Univisium. This aspect ratio was first seen all the way in the 1950s, although it wasn't until a proposal in 1998 that this could be adopted as a good compromise between the other ratios in usenote Rather ironic as 16:9 was a similar compromise proposal, chosen so CinemaScope and 4:3, the two most common extremes in aspect ratio, both take up 75% of the screen that it started to be more common. Arguably it took another two decades until the mid-2010s though for 18:9 to really start becoming a thing, as both content producers and smartphone manufacturers both took to it (although for different reasons - TV started using 18:9 as it made content feel more cinematic while avoiding too much letterboxing as would occur with a jump to 2.39:1, while smartphones started using 18:9 as companies realized it would make the phone bigger without making it too large to hold. Some phones even go a step further with 19:9 displays).

The logistics of what aspect ratio a production would use depends on the genre and tone they are looking for. 4:3 became known for its use in comedy, drama, or other small scale projects while 16:9 became known for action, science fiction, "epic scope", and other large scale projects. The reasons were that the more square frame pushes for tighter composition of the characters and vertical alignment (showing large structures and moving up or down), while a more rectangular frame widens the field of view and horizontal movement (more space for large crowds and a Chase Scene). Note that a wider aspect ratio is not necessarily more picture. Both formats can be, and have been, cropped during the editing process to resemble the other, and in experiments with aspect ratios in the 50's some movies were intended to be done so in different showings. The IMAX format is a stock selling point in modern movies for the action sequences, not only for the 1.43:1 aspect ratio but also filmed on 70mm film (the standard film stock is 35mm, which results in a spike in clarity and resolution). To facilitate this the IMAX Grand Theatres (GT), known by movie buffs as "true" IMAX theaters, have the largest screens in the world.

Because the Widescreen Shot of a feature film is so often different from that of a television screen, a movie image will not fit squarely within a TV screen when released for home video or shown on broadcast television. In order to get around this problem, the aspect ratio of the film must be altered. There are a few common methods for doing this: Pan and Scan (hereby P&S), Letterbox, Open Matte, and Visual Compression.

VHS and Betamax releases typically used open matte when possiblenote This meant if a movie was shot on standard 4-perf 35mm film with a spherical lens, there is more image not present in the theatrical release on the top and bottom, which can be used to fill the 4:3 frame with minimal cropping, and P&S when it's notnote Typically for movies shot on anamorphic 35mm. That means the 2.39:1 frame is all the information ever recorded for the movie, and cannot be opened up vertically.. Some letterboxed VHS tapes exist, but are uncommon. LaserDisc started releasing letterbox versions of almost every movienote Only for movies shot natively in widescreen. Academy Ratio and silent movies were exempt. (alongside some P&S versions) in The '90s, as it was seen as the format of film buffs and A/V geeks.

While P&S and open matte DVDs exist, they are uncommon. DVD was credited with killing P&S and popularizing letterbox, to the delight of film buffs and directors. DVD had two aspect ratio modes: 4:3 and anamorphic widescreen. Both used 720x480 resolutonnote With square pixels, the aspect ratio would be 3:2, or 1.5:1. 4:3 mode was used for 4:3 and Academy Ratio content. Anamorphic widescreen mode used Visual Compression to squeeze a 16:9 image on the disc. On a 4:3 display, the player will generate the letterbox itself, whereas on a 16:9 display, the image is stretched to normal. This allowed widescreen images to get more pixels and the letterbox to be smaller. For native 16:9 content, the letterbox is completely gone.

Unfortunately, some older DVDs that advertise themselves as Letterbox actually use 4:3 mode, imitating older letterboxed VHS and LaserDisc titles. These will not "fill" newer widescreen TV sets, despite matching (or wider) the aspect ratio on a smaller scale. This is because they were released when DVD was taking off in the late 90's and almost no one had a widescreen computer monitor or TV screen. Some newer widescreen televisions have a zoom function for this, though the zoomed image may seem pixelated or blurry.

Multiple aspect ratios have been occasionally used by directors and game designers and like for cinematic reasons. For example, in The Grand Budapest Hotel Academy Ratio is used for some scenes to convey it's the olden days (since in cinema it has started to fall into disuse in favor of widescreen in The '50s), and video games might have cutscenes in 21:9note 21:9 is an approximation of ultrawide aspect ratios. Almost no monitor, movie or video has that ratio precisely (2.33:1). They may be 64:27 (4^3:3^3, 2.37:1), the mathematical third step in TV aspect ratios, 2.40:1 (12:5), or anything in between. to give the appearance of being a movie (21:9 being the closest aspect ratio to 2.39:1). There are a couple of reasons to do this; first, changing the aspect ratio alerts the player that they are no longer in control of what is happening and can just watch the story; second, if the cutscene is pre-rendered, the black bars compress down to almost zero (or can be omitted from the encode and added in again at playback), letting you drop the bitrate on the compression slightly, shaving a small amount off the overall file size - which, if you have many hours of cutscenes, can add up to a significant space saving. Meanwhile, Brainstorm switched between two ratios

Aspect Ratio can also be an issue with cameraphone footage. Charlie Brooker has complained about people filming with their phones held upright, producing a tall, narrow image instead of the "correct" widescreen ratio.note Not all cameraphones actually shoot in 16:9 widescreen—depending on the camera component, the screen dimensions, and the software, ratios can vary from 1.33:1 all the way up to 1.77:1 and beyond. Glove and Boots would like you to take three minutes to watch their PSA on the subject here

. If you want to learn more about the evolution of the Aspect Ratio in movie history, check out this webcast