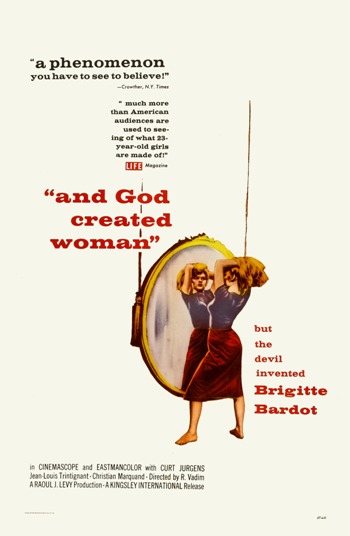 And God Created Woman (original title: Et Dieu Crea La Femme) is a 1956 French film directed by Roger Vadim and starring Brigitte Bardot. This was Bardot's Star-Making Role, though it wasn't her first film by a long shot.

The plot concerns Juliette Hardy (Bardot), a rather irresponsible 18-year-old girl living with foster parents in Saint Tropez. She is very popular amongst the male populace of the town, including wealthy businessman Eric Carradine (Curd Jürgens). But the one she falls in love with is Antoine Tardieu (Christian Manguard), who treats her like dirt. When her foster parents threaten to send her back to the orphanage, she accepts the marriage proposal from Antoine's nicer, younger brother Michel (Jean-Louis Trintignant). While Juliette is getting used to married life, Antoine moves back into the house and drama ensues.

Director Roger Vadim made another movie called And God Created Woman in 1988, but otherwise its content has nothing to do with this one.