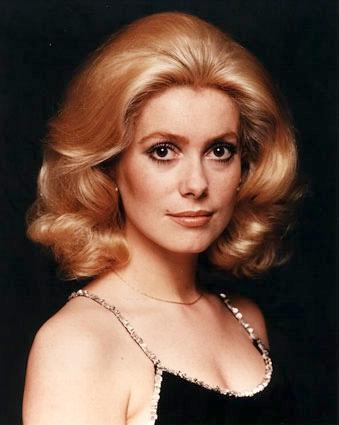 "The story is more important to me than the part."
Advertisement:

Catherine Deneuve (born Catherine Fabienne Dorléac, October 22, 1943 in Paris) is one of the most famous actresses in the history of French cinema.

She was born in Paris, the child of stage actors Maurice Dorléac and Renée Simonot. Her older sister Françoise Dorléac was enjoying her own successful film career before she was killed in a car accident in 1967 at the age of 25.

Deneuve made her film debut at the age of 13, her breakout role came in The Umbrellas of Cherbourg in 1964, in which she plays a young woman who's left alone and pregnant when her boyfriend is drafted into the army. The next year she starred in Repulsion, playing a neurotic woman who has a violent psychopathic breakdown. It was her English-language debut, but despite being fluent in English, Deneuve would make only a handful of English-language films. A loose theme of sexual repression and/or sexual violence was continued in 1967's Belle de Jour, in which Deneuve played a seemingly prim and proper housewife who actually longs to be sexually dominated and takes a daytime job as a prostitute.

She made multiple films with Jacques Demy, Luis Buñuel and François Truffaut. Truffaut's 1980 film The Last Metro won her a César Award for best actress in French film. She made another rare but memorable appearance in an English-language film with The Hunger, in which she played a bisexual vampire opposite David Bowie and Susan Sarandon. Her absurd beauty made her the official inspiration for "Marianne", the personification of France, from 1985 to 1989. Her role in 1992's Indochine got her a second César Award and a nomination for an Academy Award for Best Actress, a rare occurrence for a performance not in English. 1999 film Time Regained featured Deneuve appearing alongside both her children: son Christian Vadim (fathered by director Roger Vadim) and daughter Chiara Mastroianni (fathered by actor Marcello Mastroianni).

She was a longtime friend and muse of the iconic French designer Yves Saint Laurent, who styled her for several films.

She is still active in French cinema nowadays and nominating her for Best Actress Awards has basically become a landmark of the César Award ceremony.