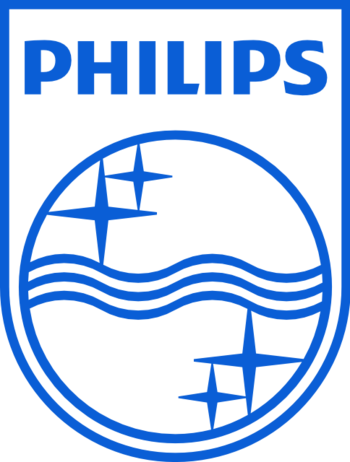 Philips' iconic "shield" logo, a stylized depiction of radio waves traveling through the air.
"One world of music on one great label!"
—Slogan of Philips Records in the USA during The '60s
Advertisement:

Formed in The Netherlands in the 1890s, the Philips corporation has evolved into one of the world's leading electronics firms. The company's employees invented (or helped to invent) the audio cassette, the boombox, the LaserDisc, the Compact Disc, and the Philips CD-i; its other products include everything from televisions to toothbrushes, from shavers to medical equipment. And for several decades, it was one of the major names in the music industry.

Philips Records began during The '40s. Shortly after World War II, the company expanded significantly through buying the Dutch division of British Decca. Its fortunes improved even further in 1953, when it became the European licensee for Columbia Records, which had ended its distribution deal with EMI; this gave Philips access to top American talent such as Tony Bennett, Frankie Laine and Johnnie Ray.note Philips also had the rights to US Columbia's subsidiaries Epic and Okeh for a while, although those rights wound up transferred to EMI Columbia Records before finally winding up with European CBS in 1968. The label also signed some British singers, such as Shirley Bassey and Teen Idol Marty Wilde. In the middle of the decade, Philips created its own sublabel, Fontana Records.

In 1962, Columbia left Philips to form its own overseas operation, CBS Records. Philips responded by purchasing the American label Mercury Records, allowing the company direct entry into the world's largest media market; in return, Mercury brought the Philips and Fontana labels to the US for the first time. No longer able to rely on the Columbia stable, Philips spent The '60s signing a strong roster of new talent throughout the world, including both England (Dusty Springfield, The Walker Brothers) and America (Blue Cheer, Nina Simone, Frankie Valli and the Four Seasons). At the end of the decade, Philips launched another new imprint, the Progressive Rock label Vertigo Records.

During The '70s, Philips created a new parent company, Phonogram, for itself and its family of labels. In turn, Phonogram partnered with Polydor Records to form a new music conglomerate, PolyGram. As the decade continued, the Philips label gradually faded in prominence; while it was still strong in the classical marketplace, Mercury and Vertigo eventually came to the forefront in pop and rock music.

In 1998, PolyGram merged with MCA to form the Mega-Corp Universal Music Group. While UMG licensed the Philips trademark from the electronics company (which no longer owned the label) for several years, by 2010 new releases had stopped; however, the Philips name is occasionally used for reissues. Philips' pop catalogue is controlled by Mercury, while its classical catalogue is controlled by Decca Classics.

Note: Many of these acts appeared on other Philips/Phonogram-affiliated labels (Fontana, Mercury, Smash, Vertigo) in various nations. Since the Mercury and Fontana trademarks weren't used in Australia for most of the 1960s, artists who were signed to those labels for the rest of the world (such as Mercury's Lesley Gore and Fontana's The Pretty Things) appeared on Philips in that country. The Ramones and Talking Heads were part of a licensing deal with Sire Records, which was distributed by Phonogram in Europe until they switched to WEA in 1978.