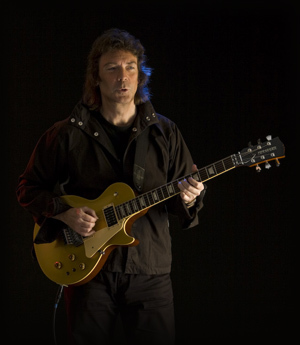 Stephen Richard "Steve" Hackett (born 12 February 1950) is one of Progressive Rock's most influential guitarists, and is best known as the lead guitarist in the classic Genesis line-up of the early 1970s. He was hired on to replace guitarist Anthony Philips when Peter Gabriel saw the ad Hackett placed in Melody Maker, making his album debut with 1971's Nursery Cryme. He left Genesis after 1977's Wind & Wuthering due to Creative Differences with his bandmates, embarking on an impressively prolific solo career that allowed him to explore pop, blues, world music, and classical music, as well as prog rock. While he has not had the sort of commercial success that fellow Genesis alumni Gabriel or Phil Collins have had, he has a solid following around the world, and continues to write and perform new material as well as play the classic Genesis catalog on tour; of all of Genesis' members, Hackett's solo career is arguably the most active in terms of releases.

He would work briefly with Yes alum Steve Howe in the short lived supergroup GTR in 1986, and later teamed up with Chris Squire, also of Yes, in 2012, recording an album under the name Squackett note sadly, Squire passed away in 2015, his last work before his passing being a guest appearance on Hackett's Wolflight album.. He has also appeared as a guest performer for a wide range of fellow artists, such as John Wetton, Neal Morse, Steven Wilson, and Ayreon. His discography

Hackett was a pioneer of the two-handed tapping and sweep picking techniques later used by Eddie Van Halen, and he also influenced Brian May, Alex Lifeson, and Steve Rothery, among others. He was named to the Rock and Roll Hall of Fame, as a member of Genesis, in 2010.

There Are Many Tropes To The Night...