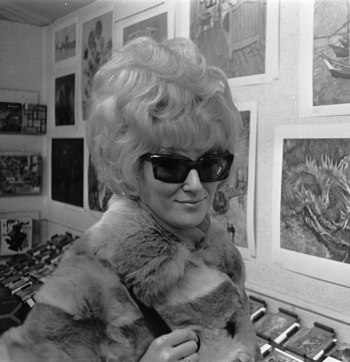 Mary Isobel Catherine Bernadette O'Brien (16 April 1939 – 2 March 1999), known professionally as Dusty Springfield, was the finest female vocalist to emerge from The British Invasion. In contrast to the image of the willowy, sweet, innocent Sixties "dolly bird", Springfield cultivated a flamboyant persona, with her outsize bouffant and dramatic use of black eyeliner. She had the vocal chops to match, with a contralto voice that could go from wispy to husky and adapt to any genre she chose.

Springfield's first hit was 1963's "I Only Want to Be With You", Subsequent hits included "The Look of Love", "Wishin' and Hopin'", "You Don't Have to Say You Love Me", and "Son of a Preacher Man". The last song is from Dusty in Memphis, considered her finest album and one of the greatest pop albums of the 1960s.

Springfield's career entered a slump with the 1970s, but she had a comeback with the Pet Shop Boys on "What Have I Done to Deserve This?" Springfield died of cancer in 1999. Just two weeks after her passing, she was inducted into the Rock & Roll Hall of Fame. She ranked 35 on Rolling Stone magazine's list of the 100 greatest singers of all time.

Tropes associated with Dusty Springfield and her music include: