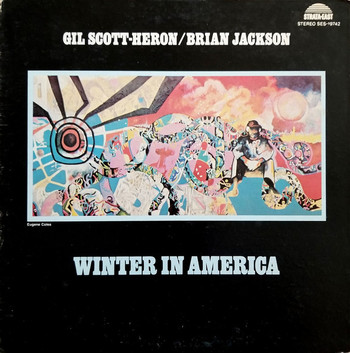 Peace go with you brother......
"At the end of 360 degrees, Winter is a metaphor: a term not only used to describe the season of ice, but the period of our lives through which we are travelling. In our hearts we feel that spring is just around the corner: a spring of brotherhood and united spirits among people of color. Everyone is moving, searching. There is a restlessness within our souls that keeps us questioning, discovering and struggling against a system that will not allow us space and time for fresh expression. Western icemen have attempted to distort time. Extra months on the calendar and daylight saved what was Eastern Standard. We approach winter the most depressing period in the history of this industrial empire, with threats of oil shortages and energy crises. But we, as Black people, have been a source of endless energy, endless beauty and endless determination. I have many things to tell you about tomorrow’s love and light. We will see you in Spring."
- Gil Scott-Heron in the liner notes of the original LP release of Winter in America
Advertisement:
Let me lay down by a stream
And let me be miles from everything
Rivers of my fathers
Could you carry me home?
- "Rivers of my Fathers"

Winter in America is a studio album by Afro-American poet and musician Gil Scott-Heron and keyboardist Brian Jackson.

Both Scott-Heron's and Jackson's third collaboration (Jackson having appeared on Scott-Heron's previous records Pieces of a Man and Free Will) and thier debut on the Strata-East label, they heavily uutilized a sparse production quality and a small supporting line-up of session musicians, allowing them to focus on more traditional styles influenced by African music and the blues. It would also incorporate heavy influence from jazz, particularly the free jazz stylings of artists such as Pharoah Sanders which were being developed at the time. Lending the record a lush, almost settled melodiousness.

Winter in America would also lyrically and thematically deal with the concepts of decay and disillusionment within the Afro-American community. It was released at a time when several Afro-American movements (Civil Rights Movement, Black Panther Party) had either lost momentum or (in the Panthers' case) been neutralized by the end of the previous decade. This gave the record a perspective of people trying to maintain their faith in their cultural roots in a bleak and demoralizing environment.

Upon its original stereo LP release in May 1974, the album had a small supply and distribution of vinyl copies due to the Strata-East label's independent distribution policy of their artists' releases. Because of this, Winter in America was considered by many fans to be the great "lost" Gil Scott-Heron album, before a proper re-release on CD in 1998. However, despite this, it was much more commercially successful than his previous records, with the album's only single, "The Bottle" landing on the R&B singles chart and the album itself charting on the Top Jazz Albums. Critically, it would overlooked upon its release, however, it would gain retrospective acclaim many would later consider as Scott-Heron's and Jackson's greatest work together, as well as an influence upon future black music genres such as Hip-Hop and neo soul.