Music / The Revolution Will Not Be Televised 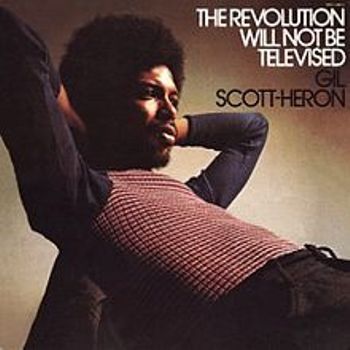 The Revolution Will Not Be Televised is a 1974 compilation album by musical poet Gil Scott-Heronnote  It collects tracks from three of his earlier albums: "The Revolution Will Not Be Televised", "Brother" and "Whitey on the Moon" from Small Talk at 125th and Lenox (1970); "Save the Children", "Lady Day and John Coltrane", "Home Is Where the Hatred Is" and "Pieces of a Man" from Pieces of a Man (1971); and "Get Out of the Ghetto Blues", "Did You Hear What They Said?", "No Knock" and "Sex Education: Ghetto Style" from Free Will (1972).

The title track is a spoken-word piece wherein Scott-Heron recites poetry while a conga and bongo percussionist plays in the background. Despite this, it is still classified as a music album, usually as jazz and beat poetry.

The track/album's name has since become an iconic slogan, and the album itself has been praised for its political and social commentary. It's a Cult Classic within the black consciousness movement, but also very popular in hip-hop, as Scott-Heron's socially conscious and catchy vocal delivery is considered to be a predecessor of the genre, along with The Last Poets. Quotes from this record have made for rife sampling, especially in Conscious Hip Hop and Political Rap.

"The Revolution Will Not Be Televised" was added to the National Recording Registry in 2005 for being "historically, culturally and aesthetically important".

The album title itself has become so iconic that it inspired no less than five (!) punny titles on TV Tropes:

The Revolution will not be read on TV Tropes, brothers!