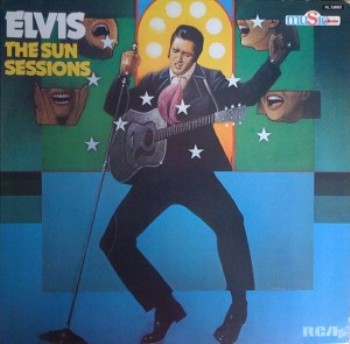 That's alright, indeed!
"This has been a hugely important album to me. I was always a big Rockabilly fan and a big Elvis fan, and to me this album is the purest expression of Elvis there was. Sure, there are better individual songs – but no one collection ever touched the album. When I was young, I used to think Elvis was the voice of truth. I don’t know what that means, but his voice… shit man, it sounded so fucking pure. If you grew up loving Elvis, this is it. Forget the Vegas period: if you really love Elvis, you’re ashamed of that man in Vegas. You feel like he let you down. The hillbilly cat never let you down."
—Quentin Tarantino, who put The Sun Sessions on fourth place in a 1994 interview with Melody Maker where he listed his Top 10 personal favorite albums.
Advertisement:

The Sun Sessions is a compilation album by Elvis Presley, released in 1976. It consists of (nearly) all the legendary recording sessions Elvis did between 1954 and 1955 at the Sun Studios of Sam Phillips. The historical importance of these sessions cannot be overstated. They practically launched Elvis' career and were fundamental in creating Rock 'n Roll. Therefore this compilation gives you a chance to experience how music history would change forever.

Back in the 1950s, due to technical limitations, these sessions were never put on one album, only on separate musical singles. Much of Elvis' albums from the 1950s and 1960s don't live up to his legendary reputation. The track-lists always lack many of his greatest hits of that period and have a lot of forgettable Album Filler. There's no Sgt. Pepper's Lonely Hearts Club Band equivalent, except for Elvis Presley (1956) and even that one doesn't do him entirely justice.

In that retrospect The Sun Sessions provides a more satisfying listening experience. All the historically important and exciting early singles are here and show Elvis in his pure, raw, energetic power. No wonder it became one of the first musical recordings to be included in the National Recording Registry in 2002.

It is also known as The Sun Collection in the UK, and was actually released there in 1975.