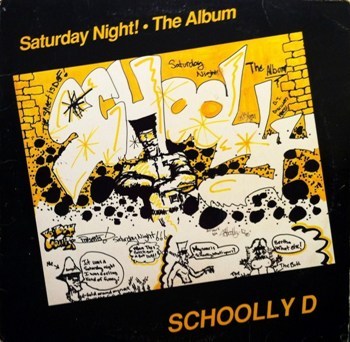 "Ah yeah
What's up, y'all
My name is Schoolly-D
I'm back again
With my DJ Code Money
Tonight we gon' do somethin' for you
It goes somethin' like this..."
— "Do It, Do It"
Advertisement:

Saturday Night! - The Album is the second album by Schoolly D, originally released on his own label Schoolly D Recordings in 1986. It's best remembered for the audience favorites "Saturday Night", "Dedication To All B-Boys" and "Do It Do It". In 1987 it was re-issued by Jive Records, with several extra tracks. At the time reviews were mixed, with most critics put off by the explicit Gangsta Rap lyrics, but as time passed by it's nowadays Vindicated by History. Schoolly D would never receive the same commercial and critical success as this record did.

The 1987 Jive Records re-release added a few new tracks "Housing the Joint", "Dis Groove Is Bad", "Parkside 5-2" to the list and altered the song order.