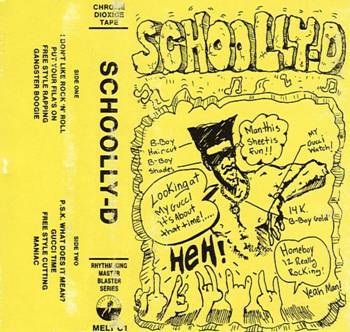 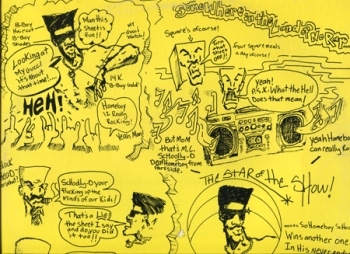 Full album artwork inside.
"All you rock and roll lovers, we're knocking you out
Because that is what rap's all about."
— "I Don't Like Rock 'N' Roll"
Advertisement:

Schoolly D is the debut album by Gangsta Rap artist Schoolly D, released in 1985. It was released on his own underground label Schoolly D Records and later picked up by Jive Records. It features the underground hits "Put Your Filas On", "P.S.K. What Does It Mean?" and "Gucci Time".

At the time "Schoolly D" was notable for tackling Darker and Edgier themes and using more explicit and vulgar language in Hip-Hop, effectively paving the way for the Gangsta Rap genre.

All songs from this album would later be featured on the Greatest Hits Album "The Adventures Of Schoolly D" (1987), with several bonus tracks.

What the Hell Do These Tropes Mean?