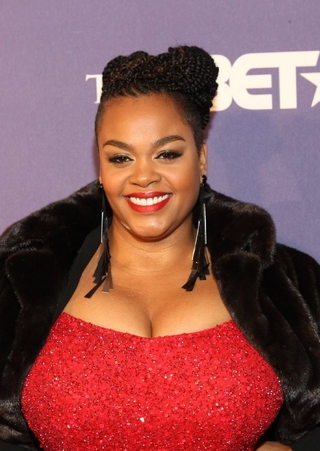 "Jilly from Philly" at the 2012 BET Honors.
Advertisement:

Jill Scott (born April 4, 1972) is an American singer-songwriter, actress, and poet hailing from Philadelphia. She had initially wanted to be a teacher, but lost interest in that field, and shifted from job to job for several years before becoming a spoken-word performance artist. She was discovered by Amir Thompson, better known as The Roots drummer Questlove, who invited her into the band. She helped them write "You Got Me," which went on to win several awards after it was performed by Erykah Badu and The Roots. After touring Canada in a production of RENT, Jill Scott began to be recognized as an artist in her own right.

Her debut album, called Who Is Jill Scott?, came out in 2000 as the first installment in a six-album contract with Hidden Beach Records. Three of these albums were released, forming the Words and Sounds series that garnered her many awards, including a Grammy in 2005 and a second in 2007. Jill Scott ended the contract after the third album, provoking a lawsuit from her former label, though she ultimately did not have to pay the label. Her 2011 album The Light of the Sun was released under the new label Blues Babe Records, which she created to assume direct control over her marketing, promotion, and releases.

Besides the albums, Jill Scott has made many live performances in America and abroad. Critics describe her as a "Neo Soul" singer, combining soul music with jazz, R&B, hip-hop, and spoken-word performances to create a distinctive sound. She has been compared to Minnie Riperton and Deneice Williams for her rich vocal range and ability to hit notes that are traditionally extremely hard for singers to reach.

Outside of the field of music, Jill Scott has been an actress since 2000, when she took the advice of her friend Ozzie Jones and joined a Philadelphia theater company. Her first break was on UPN's Girlfriends in 2004. She made her film debut in 2007 with Hounddog and Tyler Perry's Why Did I Get Married?. Her first lead role was in Anthony Minghella's last film, The No. 1 Ladies' Detective Agency, as the detective Precious Ramotswe. Since then, she has gone on to act in several movies and shows, branching out into voice work.

In her personal life, she was married to graphic artist and DJ Lyzel Williams from 2001 to 2007. More recently, she met and became engaged to her drummer, Lil' Jon Roberts, in 2008. They welcomed a son in April 2009, but broke up in June of that year. Jill Scott lives and works in California now, and may be found at missjillscott.com