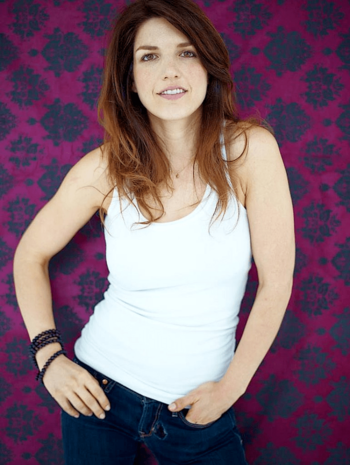 Bree Sharp (born December 17, 1975) is an American indie singer/songwriter. She's best known for her cult hit song "David Duchovny" about Fangirl Perverse Sexual Lust toward the star of The X-Files. Bree joined her frequent collaborator Don Di Lego to form the band Beautiful Small Machines. Sharp worked on the production and/or contributed songs to the English dub productions of several anime. She sang "This Side of Paradise

" from  Pokémon: Destiny Deoxys, sang the English OP "Team Up!

" and most of the songs in Mew Mew Power (Tokyo Mew Mew) and worked as a writer on Magical DoReMi.

Song "David Duchovny" as a tape made its way to Duchovny and reportedly, he kept playing the song in his trailer. Charles Forsch and Will Shivers (X-Files assistants on the set) created a video for the song, splicing clips of Duchovny/Mulder with footage of fans, random people, X-Files staff and celebs (Alex Trebek, Whoopi Goldberg, Sarah Michelle Gellar, Pamela Anderson, Brad Pitt or George Clooney) — lip-syncing the lyrics. The clip might be the best, definitive summary of the pop-culture in The '90s. It is a thing to behold.