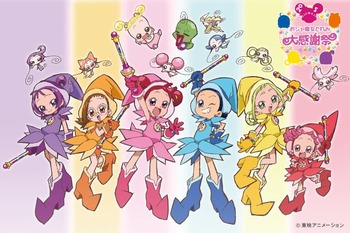 The Ojamajos (left to right): Onpu, Hazuki, Doremi, Aiko, Momoko and Pop.
"If you had magic, what would you do?"
Advertisement:

Ojamajo Doremi (Ojamajo being a portmanteau of "ojama", meaning a hindrance and "majo", meaning witch) tells the story of Doremi Harukaze, the self-proclaimed "unluckiest pretty girl in the whole world", who dreams of becoming a witch just like in the stories she reads. One day she stumbles across a mysterious shop run by an old woman who fits the profile of a witch to a tee. Doremi calls her out on it, and suddenly the woman transforms into an ugly little frog thing: turns out she really was a witch, and this is what happens when a human correctly identifies one.

The ex-witch, Majo Rika, takes her on as an apprentice witch so that Doremi can eventually gain enough magical power to change her back. The thing is, Doremi is horrible when it comes to learning the trade, which leads to Majo Rika branding her an ojamajo. Not soon afterwards, Doremi's two friends Hazuki Fujiwara and Aiko Senoo get in on the act, and in the latter half of the series, Onpu Segawa- another apprentice witch who uses magic for selfish reasons- turns up as an antagonist of sorts.

In the second series (Ojamajo Doremi # (Sharp)), Onpu has reformed and Doremi gains a magical "daughter" called Hana that she has to raise for one year. The third series (Mo~tto! Ojamajo Doremi) introduces American witch apprentice Momoko Asuka to help the group pass a test to become formal witches. This test involves turning their shop into a bakery for the season. The fourth and final television series (Ojamajo Doremi Dokka~n!) has Hana force-grow herself to the same age as Doremi so she can attend school with her "mommy". A fifth series followed (Ojamajo Doremi Na-i-sho) that was set during Mo~tto and focused on various secrets held by the main characters.

The franchise was a massively popular series in Japan; notably, it's the third longest Magical Girl series to date behind Pretty Cure and Sailor Moon, but unlike the two other touchstone series, the show takes place in a single continuity.

The series has been dubbed into several languages and released in multiple countries under the name Magical DoReMi. In America it was licensed by 4Kids, becoming the first version not to call the main character "Doremi" (instead they called her Dorie, turning Hazuki and Aiko into Reanne and Mirabelle respectively to retain the pun in the title). While the first twenty-six episodes were aired on television, the last twenty-five were only available online.

In 2011, Kodansha began publishing a series of Light Novel trilogies under the title Ojamajo Doremi 16. The novels were penned by Midori Kuriyama, the series' main episode writer, with illustrations provided by Yoshihiko Umakoshi, the original series' character designer. The story take place years after the ending of the original anime series, where Doremi is now a high school student. The stories are written in the same episodic format as the television series, dealing with problems in both Doremi's personal life and affairs in the Witch World. After the release of Ojamajo Doremi 16 ~Come On!~, the novel continued on as a second trilogy titled Ojamajo Doremi 17, and later a third titled Ojamajo Doremi 18. The LN series reached its conclusion with Ojamajo Doremi 19.

In 2019, to celebrate the 20th anniversary of the series, there's an original net animation called Ojamajo Doremi: Comedy Theater that features chibi versions of the character designs light novel series. An additional light novel called Ojamajo Doremi 20, written by Yumi Kageyama, has also been released, alongside a fall 2020 movie called Majo Minarai Wo Sagashite, which is set in an alternate canon where Ojamajo Doremi exists as a Show Within a Show.

Not to be confused with Ojarumaru.

This series has a character sheet. And now it has a recap in the works.