Manga / The Ones Within 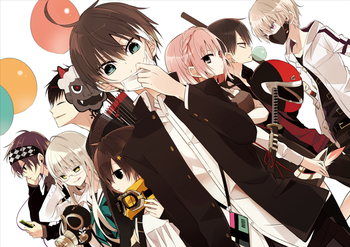 Spreading throughout Japan is a series of mysterious disappearances, targeting only youths. The only similarity is that each victim was a well-known LPer, all on the verge of completing the closed beta of a free-to-play game, The Ones Within - Genome.

A group of such victims find themselves in an unknown location, where they're told that they'll be doing a livestream of The Ones Within - Genome—except this is no video game, but instead reality. To earn their freedom, they must achieve 100 million total views, starring:

However, when conspiracies lurk around the corner and rebellion pays a price, it only gets more complicated from there.

Naka no Hito Genome [Jikkyouchuu] (The Ones Within - Genome [On the Spot Coverage]) is an on-going manga by Osora, serialized in Gene Pixiv

It received an anime adaptation that began airing in July 2019. The initial PV can be found here