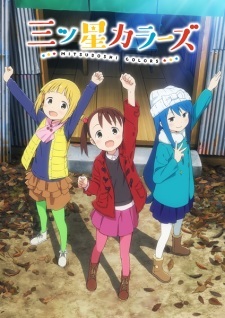 The Colors
A Slice of Life comedy manga from creator Katsuwo.
Advertisement:

In a small corner of Tokyo, three elementary girls protect their town. Doing good and enforcing rule against the various dangers that befall it. These three girls are the Colors, fearless guardians of Ueno Park!

...Or so they say. In reality, meek Yui Akamatsu, ever exuberant Sat-Chan and enigmatic Kotoha are three friends who spend their days having fun around town. Whether going to the lake, visiting a zoo, chatting with their Cool Old Guy friend or making life Hell for the surly local cop.

Was made into an anime for the Winter 2018 season. It is currently licensed by Sentai Filmworks and can be currently legally viewed on Crunchyroll. An English dub was announced in April 2019.

Tropes Present in this work: