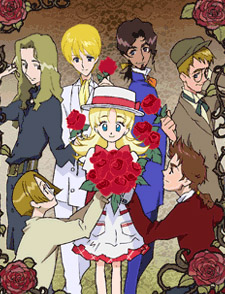 Ashita no Nadja (明日のナージャ, Ashita no Nāja, lit. "Tomorrow's Nadja") is an Anime First series produced by Toei Animation in 2003, airing right after the end of one Cash Cow Franchise, and before the beginning of another. It premiered in Japan on the anime satellite television network Animax and the terrestrial TV Asahi network, as well as several local cable channels. The series is available on DVD (in Japanese) containing two to three episodes each. Was aired once in a while in Latin America Cartoon Network and is occasionally seen in local Latin American cable stations. It also had a manga adaptation, serialized by Kodansha in the manga magazine Nakayoshi and collected in two bound volumes.

A long time ago in western Europe, a young twelve-year-old orphan named Nadja Applefield lived a peaceful and humble life under the care of Applefield House, a British orphanage. She's the local Cool Big Sis, a keen dancer, and is steeling herself for her thirteenth birthday, at which age she will be forced to leave her home and make her way in the world.

However, one day her guardian Miss Applefield presents Nadja with a trunk filled with several luxurious things including a Pimped-Out Dress, a diary and a anonymous letter. The author of the letter reveals Nadja's deceased mother is actually alive, and that Nadja was (unwillingly) placed into the care of Applefield House when the mother's life was threatened by a serious illness.

Before Nadja can process all of this, Applefield House is attacked in the night by two mysterious burglars looking to steal Nadja's prized medallion, which seems to be the key linking Nadja to her heritage. A Mysterious Protector saves Nadja's life, but Applefield House is almost burned to the ground.

Stuffing all her belongings and newfound dress into her new trunk, Nadja sets off on a journey across Europe with the aid of a traveling circus to discover the secret of her medallion and hopefully reunite with her birth mother, while evading the sinister plots of her greedy Evil Uncle, Hermann Preminger.