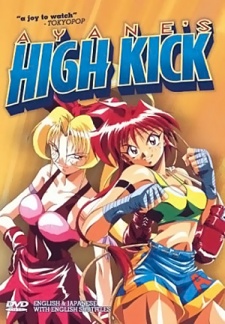 Are you ready to rumble?
Advertisement:

Ayane's High Kick is a OVA sports anime originally released in Japan in 1997 by the Nikkatsu Corporation and Rikuentai. It was licensed for released in North America by U.S. Manga Corps in 1998.

For as long as Ayane Mitsui can remember, she has dreamed of becoming a professional wrestler. Now she has a chance to make those dreams come true with a tryout for the All Japan Women's Pro-Wrestling circuit in front of her idol, and who she hopes to be her future rival, Women's World Champion Manami Toyota. These hopes are quickly dashed when a failed vaulting maneuver ends up with Ayane crashing through the judging table, leaving two of the judges injured and her without a contract.

Though, as fate would have it, her performance catches the eye of Kunimitsu, an unscrupulous Kickboxing coach with an eye for raw talent who also knows a good sap when he sees one. So he approaches Ayane and offers to train her at his indie dojo, which turns out to be a ramshackle lot situated underneath an overpass. And Ayane, being eager for any chance to realize her dream, accepts. Thus, begins the most grueling training regiment of her life.

Despite the title character's name, the series has no connection to Dead or Alive or its infamous advertising campaign.