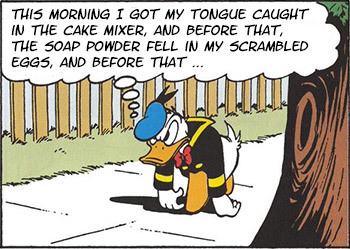 Who gets stuck with all the bad luck?
No one — but Donald Duck!
Aunt Wu: Your future is full of struggle and anguish. Most of it self-inflicted.
Sokka: But you didn't even read my palms or anything...
Aunt Wu: I don't need to. It's written all over your face.
— Avatar: The Last Airbender, "The Fortuneteller"
Advertisement:

Some people have all the luck— lucky they aren't this guy.

When you're Born Unlucky, it's like the world is out to get you. You, personally. Lucky pennies crumble in your hands; rabbits' feet run away in terror. Black cats won't cross your path, and mirrors shatter preemptively when you walk into the room. When you walk outside, it starts raining; when you walk inside, your house collapses. The only time you attract good luck is as a set up for even worse luck: You find a winning lottery ticket, but the wind picks up and blows it out of your hands... and into your rival's. You are really unlucky— so mind-bogglingly unlucky it defies all chance. However, you will never die before your time — because the universe would like to torture you some more.

Look for terms like "cursed" or "born under a bad sign", although they aren't required— just so long as we know Lady Luck (or Fate, or the world, or God) doesn't like them very much. At all.

There may be significant overlap with Cosmic Plaything, Butt-Monkey, and The Chew Toy, but the key about being Born Unlucky is that it really IS "luck" that is bringing them down. A Butt Monkey can be a Butt Monkey because other characters tease him, but someone suffering this trope is always tormented by plum bad luck. Also, this can be Played for Drama. In games, being Born Unlucky may be represented by a Luck Manipulation Mechanic in which players are forced to roll dice multiple times, and must accept the lowest result.

In games, The Hero can also be cast as this to extend game length. That guy you traveled halfway across the world to get the MacGuffin from? He's dead. But you can make it yourself using his notes! Which are spread across the enemy's base. But once you collect them, you're all set! To travel back across the world to gather material to build it. But they're all in one small area! Which is swarming with even more bad guys.

Some folks who are Born Unlucky may also be The Jinx. The difference between these two is who the bad luck affects— someone who's Born Unlucky will slip on a banana peel, but a Jinx will cause everyone else in the room to slip on banana peels. Heaven help the former if he ever meets the latter. (Or, well, no— it probably won't.)

Contrast Born Lucky and Unluckily Lucky. Compare The Klutz, The Jinx. See also Cosmic Plaything (destiny has fun messing with them), Butt-Monkey (the butt of everyone's jokes), or The Chew Toy (someone whose constant pain is intended to amuse). If the bad luck is meant to be funny, it's because of Comedic Sociopathy.

Examples (if possible, elaborate on how their bad luck works):