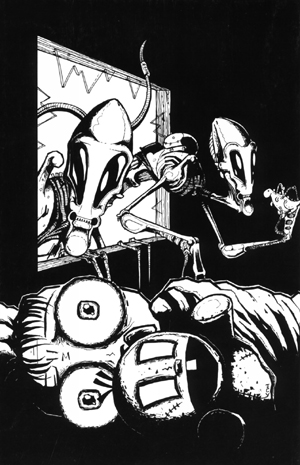 A Spin-Off from Johnny the Homicidal Maniac, Squee ran four issues and followed the titular next-door-neighbor-of-aforementioned-maniac as he encounters aliens and all other manner of paranormal activity, gets abused by his silhouetted parents and demonic teacher, has adventures with the Antichrist, daydreams, and desperately clings to his sanity.

Titmouse and the comics' author Jhonen Vasquez were at one point announced to be collaborating on a short film about Squee, which would've seen the poor kid get sold to a fast food restaurant as meat and lead other imprisoned children on an escape mission. Despite some script pages arising on Vasquez's Twitter, the project seems to have been abandoned.

Definitely not to be confused with the identically titled trope. There's very little to Squee about in Squee.