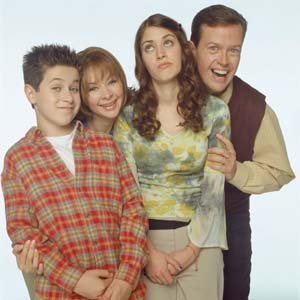 The Pitts is a short-lived Dom Com that aired on FOX in 2003 (in place of the dark comedy Titus following Christopher Titus arguing with executives over the show's content) and starred Dylan Baker, Kellie Waymire, Lizzy Caplan and David Henrie.

Bob and Liz Pitt, their teenage daughter Faith and their 12 year old son Petey are a normal middle class suburban family... or at least they would be if they weren't both Born Unlucky and major Weirdness Magnets. Be it mere freak fires or being mauled by beavers or outright haunted cars and werewolves the Pitts regularly put up with situations and injuries more commonly found in cartoons than Live-Action Television. The show was co-created by former The Simpsons showrunner Mike Scully, so that would explain the cartoonishness of the show.

The original show did not last long (five episodes, plus two which were never shown in the US), due to poor reviews and ratings. There was an abortive attempt at an animated adaptation in 2007 that would have seen Baker and Caplan return to their characters (Waymire had passed away in 2003 a few months after the show ended and Henrie was unavailable having joined Wizards of Waverly Place). FOX decided not to run with the animated version.