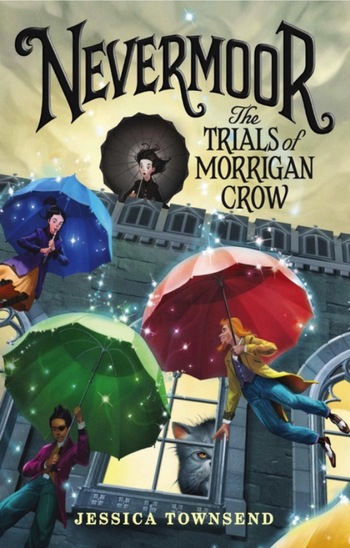 Nevermoor is a series of middle grade Urban Fantasy books by Jessica Townsend.

The story follows Morrigan Crow, a clever but phenomenally unlucky young girl who is cursed to die on her eleventh birthday. When the fated day arrives, however, she's rescued by a mysterious and eccentric benefactor, Captain Jupiter North of the Wundrous Society, who whisks her away to the secret magical (or "wundrous") city of Nevermoor. He's forced to do so by smuggling her into the city, very illegally... and unless they can find a legal way for Morrigan to stay, she'll be deported back home, where she'll almost certainly die.

Her only chance is to join the Wundrous Society herself, because members of the Society can't be prosecuted by the law... but in order to join the Society she must first compete for a place against hundreds of other children, all of whom have extraordinary and sometimes supernatural talents; talents that Morrigan completely lacks. Luckily she's got the help of Jupiter, a gigantic talking cat named Fenestra, and a friendly fellow competitor named Hawthorne Swift... but who is this "Wundersmith" that everyone's so scared of?

At the time of writing, three books in the Nevermoor series have been published, with a fourth book confirmed.

A film adaptation has also been announced, with Drew Goddard as writer and producer. In 2022, it was announced

that Michael Gracey (The Greatest Showman) would direct the film.

Now has a character sheet. All character-specific tropes should go there.

Examples (spoilers for the first book are unmarked)