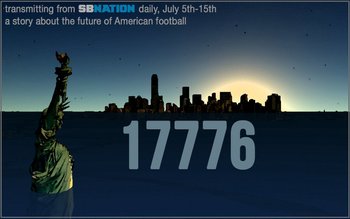 Something is terribly wrong.
Advertisement:

is a surreal multimedia speculative fiction work, written and illustrated by Jon Bois and presented by the sports blog SB Nation. While at first glance it appears to be a simple article about the future of American Football, things quickly start to get... stranger.

Shortly after visiting the page, the actual story begins to unfold - concerning three space probes and American culture, past and "present" (as in 17776). And that present has a version of football that is very different than ours.

The first chapter was published on July 5th, 2017, and quickly went viral. The series concluded on July 15th.

The series as a whole consists of several smaller self contained series:

Due to the impossibility of describing the story in-depth without spoiling at least part of it, all spoilers below are unmarked. It's best if you read the story before reading the trope list so as not to spoil the experience.