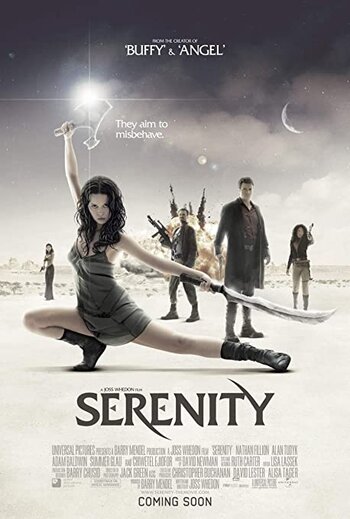 "Half of writing history is hiding the truth."
"I aim to misbehave."
— Captain Malcolm Reynolds
Advertisement:

After Firefly was cancelled partway through its first season, a massive letter-writing campaign was launched to bring it back. Years later, a movie was released to provide closure to some of the unanswered questions of the show and accompany the comic series and other Expanded Universe materials.

Shortly after the end of the series, the crew of the Firefly-class ship Serenity is still getting into trouble. The presence of government experiment River Tam has brought the fist of The Alliance down on her, Captain Malcolm Reynolds, River's brother Simon, Kaylee, Zoe, Wash, Jayne, Shepherd Book, and Inara.

More details are brought to light about the experiments that were done on River by the government and the Alliance conspiracy that she learned by accident through her powers, driving her insane. Pursued by a ruthless and devoted Government Operative, the crew seek to solve the mystery surrounding River Tam and the Alliance that has caused them so much misery, and perhaps use it to get out from under the thumb of the Alliance once and for all.

Not to be confused with the 2019 movie of the same name, starring Matthew McConaughey and Anne Hathaway.