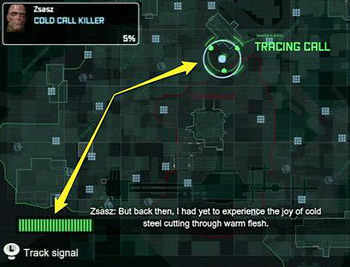 A horror and police procedural trope where the police set up a phone trace to catch a criminal but they need them to stay on the line for a certain amount of time. The amount of time will vary, yet somehow the criminal will know the exact amount of time and purposely hang up just before the police can get a trace. If it's a particularly high-tech setup, expect to see a computer generated map showing the tracing process.

Even if the person on the other line is encouraged to keep the other person talking, it never seems to work. The criminal will say everything they want and still always hang up a few seconds shy of the minimum time to trace the number. In some cases, the criminal will say they're aware of the phone trace or say how many seconds the call took. This trope is often used by serial killers or any particularly clever character. A common subversion is to stay on the line just long enough for a trace, but the purpose is to lead the police somewhere else as part of the criminal's elaborate plan.

Up until perhaps the late 1970s and early 1980s this was somewhat accurate. Telephone switches were racks of mechanical switches in which, when you dialed a number - using a rotary phone, a line selector used the clicks to determine which frame in the next digit to connect your call to. You dialed a 3, and the relay went to the 3xx-xxxx rack, then the next digit of 7 would connect to 7 rack in the 3 series, and so on, until you got to the last digit of the subscriber's number. If it was in use, you got dumped to the busy generator. Otherwise, you got to hear the ring tone as the line was rung. All these connections were created to make a physical connection between your phone and the destination phone. That means, to trace a call on a mechanical switch, they had to see where the wire ran to, then trace what that one was connected back to. This also meant, if the trace wasn't finished before the call was, the "sickening sound" of a call collapsing as the circuit was released for another call to go through.

If the call was long distance, they'd have to send someone to the central office that connected the call to the city, then trace it back to wherever it was connected from, and so on. This is why if someone was making obscene phone calls long distance, it would require many repeated calls to trace back the caller because of the time involved to trace, say, a call over mechanical switches from Pasadena, California to Ellicott City, Maryland. However, traces from major cities (say, Los Angeles to Baltimore or Chicago) even over mechanical circuits would be much faster, because the calls didn't have to go through intermediate cities.

As digital computers became more powerful, a switch basically was a mainframe computer with a bunch of phone lines plugged into it instead of a bunch of racks connected by mechanical relays. As a result, tracing a call means nothing more than going to the console, entering the phone number and asking who is connected to it. Eventually with the development of SS7 switches, it got to be sophisticated enough you could get it yourself in real time for a few dollars extra through Caller ID.

An essential part of The Calls Are Coming from Inside the House.

As technology marches on, this trope has morphed into tracing the computer connection, but the essence remains the same. Is often a source of artistic license, since (unless the work is set in the 1960s or earlier) the phone company can use their computer records to tell the cops what numbers called a given phone, and when, even months after the call. The rise of phone spoofing (making the phone company think that you're calling from a different phone number entirely) could see a revival of this trope in a different form, however.

This trope can be complicated from an Anonymous Public Phone Call, as phone booths in Fictionland are hard to trace.

Not counting Caller ID, which landline phones can get at a fee, and which is included on cell phones as part of the service, giving you the caller's number (and possibly name) before you even answer the phone.

In order to justify this trope in a modern day setting, the call is often bounced through a bunch of alternate locations, and the back-tracing of the call to its actual source will take time.

Getting a Tap on the Phone

Mrs. Burton tries to keep the kidnapper on the line until Norberg can get a tap on the phone.

Getting a Tap on the Phone

Mrs. Burton tries to keep the kidnapper on the line until Norberg can get a tap on the phone.