Literature / The Rime of the Ancient Mariner 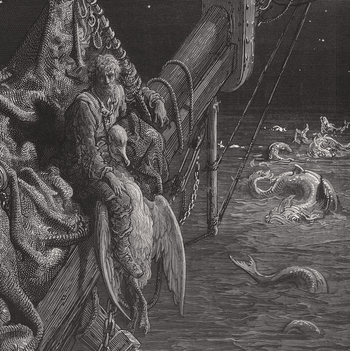 And a thousand thousand slimy things
Lived on; and so did I.
Advertisement:

The Rime of the Ancient Mariner by Samuel Taylor Coleridge is one of the most-referenced pieces of Romantic poetry. Ever heard "Water, water everywhere and not a drop to drink"? Yup, it's from here (although in the original text it's ''nor any drop to drink''). It is a relatively long Narrative Poem about a disaster-prone ship, enclosed in a Framing Device where the sailor who cursed it is describing his travels to a guest at a wedding. It's notable for its religious and naturalistic themes and for having a lot in common with Gothic literature. The poem is divided into 7 sections, each dealing with a different part of the Mariner's journey.

Gustave Doré illustrated it in a beautiful and unforgettable way. More recently, Underground Comics artist Hunt Emerson published an illustrated edition that is unforgettable in a very different way. Iron Maiden turned it into a 14-minute Filk Song.

Borrows elements from Nautical Folklore. Has its own Referenced By page.