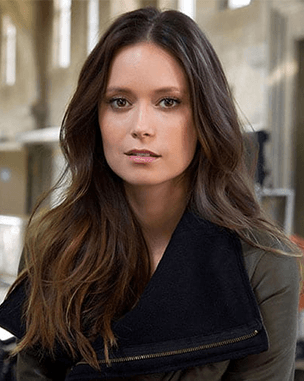 "I've done other things, but it always seems like my sci-fi projects have been what people respond to the most, because those fans are extraordinary, so passionate."
Advertisement:

A native of San Antonio, Texas, Summer Lyn Glau (born July 24, 1981) is a classically trained ballerina who broke into acting in 2002 with a guest spot on Angel (playing a ballerina). Her career has primarily been composed of active women and damaged girls (usually combined) in science fiction and fantasy series.

Her first role (the aforementioned Angel guest spot) got a standing ovation from the cast and crew after recording her single scene of dialogue, and critical reviews for her performance as River Tam and Cameron Phillips have been overwhelmingly positive. However, she has yet to get much mainstream recognition as her roles have largely been reserved to TV shows and films that failed to perform on the business end.

In 2016, she took time out from acting to focus on raising her two daughters but returned in a recurring role in the 2019 series Wu Assassins.