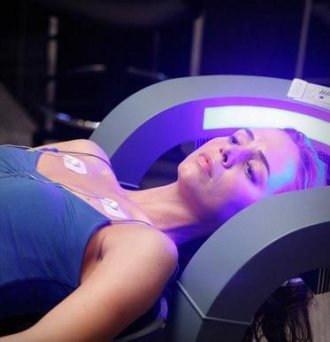 "Did I fall asleep?"
DeWitt: I'm talking about a clean slate.
Caroline: You ever try and clean an actual slate? You always see what was on it before.
— "Ghost"
Advertisement:

Dollhouse (2009-2010) is a 26-episode Cyberpunk show by Joss Whedon, which began airing in February 2009 on Fridays at 9 p.m. on FOX. Against all odds, it was renewed for a second season, but low ratings led to its cancellation. Luckily Whedon anticipated the cancellation and was able to score a full 13 episode second season, managing to get a complete plot and some closure out of its final episodes, after the cancellation order was given.

The show is about the titular "Dollhouse", an illegal offshoot of a corrupt medical conglomeration known as the Rossum Corporation. Basically, the Dollhouse consists of a group of men and women called "Actives" or "dolls," who have been wiped clean of their own personalities and have new personalities, tailor-made to suit the customer's needs, "imprinted" onto them for the various clients of the Dollhouse. Besides the obvious applications, "dolls" can be rented for use as made-to-order surrogate mothers, bodyguards, best friends, thieves, negotiators, and politicians (and those are just the examples from the show itself). If you have the money, the Dollhouse can create a human being to fulfill your desires, no matter what they are. Each doll gets wiped and imprinted many times for many different purposes over the course of their service contract, which they signed voluntarily before being wiped.

Throw in one obsessive FBI agent, Paul Ballard, looking for the Dollhouse; one escaped Active named Alpha who is insane; and one Active, Echo, who appears to be remembering things from her engagements that should have been wiped; mix for two minutes and bake at 350 degrees. Season with a bunch of guest stars from Joss Whedon's stable, including Summer Glau, Alexis Denisof, Amy Acker, Alan Tudyk, Eliza Dushku in the starring role of Echo, and breakout performances by Fran Kranz, Dichen Lachman and Enver Gjokaj, and we have a Dollhouse.

Note: the true finale of Season One, "Epitaph One," is actually a Lost Episode on the DVD and Blu-ray sets. Please view this before watching the series finale, "Epitaph Two: Return."

Dark Horse Comics is now putting out a miniseries Dollhouse: Epitaphs, which takes place after most of the series, but before "Epitaph One" and "Epitaph Two."

There is a Character Sheet for this series, and now a recap page.

Not to be confused with the play by Henrik Ibsen, or Alawar Game's hidden object Stray Souls: Dollhouse Story.