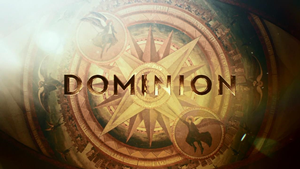 "May the Savior bless you; may he bless all of us."
Advertisement:

Dominion is a Syfy channel series set twenty-five years after the film Legion (with some tweaking), on an Earth where humanity has been reduced to a few walled city-states after God disappeared and the angels, blaming humans, launched a genocidal assault. The Archangel Michael, the only angel to side with humanity, resides in the city of Vega (formerly Las Vegas), keeping watch over the city and the child born 25 years ago that will be the salvation of humanity. A peace has prevailed for the last few years, but we wouldn't be having a show if that weren't about to change...

On October 15th 2015 Sci-fi cancelled the series after 2 seasons.