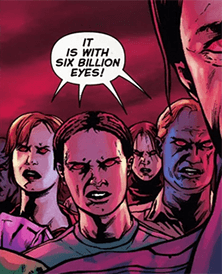 All is one in Darkseid.
"Then Jesus asked him, 'What is your name?' And he replied, 'My name is Legion, for we are many.'"
— Mark 5:9, The Bible
Advertisement:

Humans are very social creatures, we enjoy being around each other a great deal. Our friends, our family, our lovers, our coworkers, are all sources of wholesome fun. If you're not into that sort of thing, well, there's something wrong with you. Or not. But what happens when you go just a bit too far, become more and more of other people while less and less of yourself? Can you go so far that there's nothing left of you at all?

If this sounds like you, then your name may just be Legion.

I Am Legion is a trope where some group or individual is made more sinister or strange by having them avoid referring to themselves in the singular. Through their speech and mannerisms they will make the viewer question the nature of the character. A lone character speaking as though they were chanting along as part of a chorus, or an assembly speaking in perfect unison, regardless of the situation.

Common quality of Hive Minds, Mind Hives, and cases of Many Spirits Inside of One, but this isn't necessarily so. Not to be confused with Royal "We". Often speak with Voice of the Legion. Has nothing to do with I Am Legend. Roger Zelazny's My Name Is Legion (about a secret agent with a multitude of false identities) is also not an example of this trope. Neither is the X-Men character Legion (or the same character of his own series, who has multiple personalities). Could be a Limited Social Circle that has Jumped Off The Slippery Slope. I Am Spartacus uses this as a diversion.