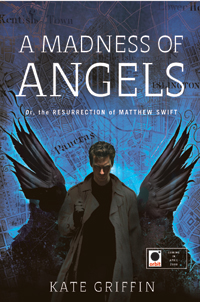 For Matthew Swift, today is not like any other day.
We be light, we be life, we be fire
We sing electric flame, we rumble underground wind
we dance heaven!
Come be we and be free!
We be blue electric angels.
— Anonymous spam mail, source unknown
Advertisement:

The Matthew Swift novels are an Urban Fantasy series by Kate Griffin (alias Catherine Webb, who also writes under the pseudonym Claire North). The series begins with urban sorcerer Matthew Swift waking up mysteriously in a house he used to own, two years after his violent death, with different-colored eyes and an internal narrative that thinks of himself as "we" about half the time.

Every book features Matthew facing off against some seemingly-unbeatable enemy, usually a modern Eldritch Abomination. The series relies heavily on Post-Modern Magik. In this world, life is magic, and magical beings are what happen to all the "leftover life" in a city. This leads to such entities as fairies with tinfoil wings, and a faerie court relying on makeup and Hollywood-style beauty and the blue electric angels, who are the voice in the telephone come to life from humans pouring so much of our emotions into it.

There is also a sequel series taking place after The Minority Council which follows a different protagonist.