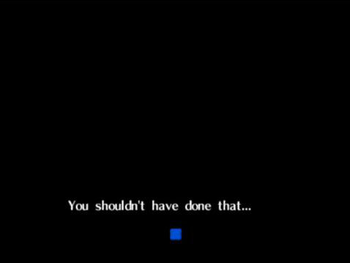 Ben Drowned (also known as You Shouldn't Have Done That, Haunted Majora's Mask, or just by its author's name Jadusable) is a Creepypasta-turned-AlternateRealityGame created by user Jadusable

about how he got a free Majora's Mask cartridge from a strange old man. This goes about as well as you'd expect.

After he gets home and plays it, he notices some odd quirks and strange bugs. After performing the fourth day glitch

The first part of the story can be found here

, the second part is here

, and what has happened in the third part so far can be found here

. It's not a good idea to read them if you plan on getting any sleep tonight. Also, OOC happenings can be found on numerous pages of the Jadusable wiki; there was formerly a page dedicated entirely to OOC updates, but it has since been deleted.

On March 17, 2020, nine years after "free.wmv" was uploaded and just a month before Majora's Mask's twentieth anniversary, a new video

was uploaded on Jadusable's channel, followed by another

two days later. And as of March 20th, it seemed

that a new chapter was about to unfold.

On Halloween 2020, a little over 10 years after it began, the story concluded with its final video, "The End.wmv". Despite the story being over, Jadusable confirmed on his Twitter that a new story in the same universe

is in the works.

On February 28, 2021, "The Epilogue" was uploaded. Described as being of "ambiguous canon", it serves mainly to announce a sequel to the infamous April Fools' Day video "king kong.wmv" for April 1, 2021.

set up to answer any questions as well as provide general updates.

Should not be confused with when someone has Been Drowned.

This ARG provides examples of the following tropes:

YOU
DIDN'T
SAVE
HER