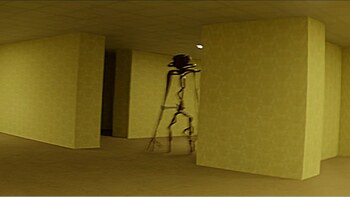 "Hello? Is someone there?"
"That's not a person... that is not a fucking person!"
— Marvin E. Leigh, "Pitfalls"
Advertisement:

On January 7th, 2022, interest in the Backrooms lore was bolstered when a YouTube user named Kane "Pixels" Parsons

about a camera operator who finds himself trapped in the Backrooms, unknowingly stalked by wire-like entities, one of who eventually decides to give chase. The video was given a VHS filter to disguise the CGI nature of the project, and many viewers were impressed with the lifelike camera movements that made the video feel real. The video was later followed by others which turned it into a full Analog Horror series, disconnected from the previous Backrooms-themed wikis.

The series follows the secretive ASYNC Foundation as its employees conduct experiments aimed at accessing alternate dimensions — in order to to solve storage and housing issues. Their efforts result in the Threshold, a portal to the Backrooms. But once this doorway is opened, people begin to disappear into thin air with increasing frequency, finding themselves trapped inside the Backrooms, which, as ASYNC begins to discover, is somewhere that is far from hospitable for human life, and not as deserted as it first appears...

has been announced, with Kane set to direct.

"If anybody, blame him."
Feedback

MatPat explains why the Uncanny Valley works so well in Analog Horror, citing three works he discussed in previous videos as examples.

MatPat explains why the Uncanny Valley works so well in Analog Horror, citing three works he discussed in previous videos as examples.